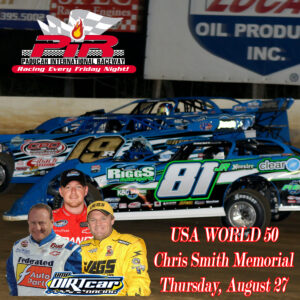 Two huge events are on tap as midweek shows, this week, as the UMP Super Late Models are coming to Macon Speedway on Wednesday, August 26 then making the trip to Paducah International Speedway for the Thursday, August 27 show.  As an added attraction, NASCAR stars, Justin Allgaier, Kenny Wallace, and Ken Schrader will be competing in the UMP Modifieds at both events.

Justin Allgaier, a Riverton native and former regular at Macon Speedway, will be returning to his roots to race in the Billingsley Towing Modifieds in his first visit this season.  Allgaier is competing in his second full season in the Brandt Chevrolet in Sprint Cup.  He will be joined by NASCAR stars Ken Schrader and Kenny Wallace, a pair of Macon Speedway co-owners who just can’t get enough of dirt track racing.  The B-Mods will also race in addition to the two high powered divisions.

The Herald & Review 100 serves as the crown jewel of racing at Macon Speedway but it was rained out in July.  The race will be the 35th running of the storied event.  The race will likely attract the sport’s biggest names.  Bobby Pierce claimed the Hell Tour Series championship but will be competing on Wednesday night.  Pierce is coming off of an impressive second place finish in the NASCAR Camping World Truck Series race at Eldora’s Mudsummer Classic.

Schrader, Wallace, and Allgaier will also be competing on Thursday, August 27 at Paducah International Raceway in Kentucky  as part of the USA World 50-Chris Smith Memorial show.  The highly popular Super Late Model event is also a rescheduled event as the Hell Tour was postponed at Paducah in June.  The event will see racing in the Modifieds, with the NASCAR stars facing off in addition to the Kentucky Vintage Racing.

Permanent link to this article: http://paducahracing.com/2015/08/allgaier-schrader-wallace-set-for-midweek-shows-at-macon-paducah/