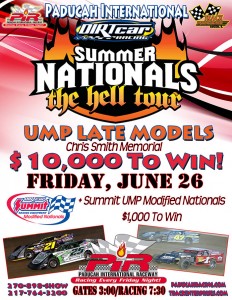 The UMP DIRTcar Summer Nationals Hell Tour is approaching the 1/3-mark of its grueling 2015 schedule. While the wet weather has claimed events at Wilmot, Spoon River, and Tri-City, the six completed events have produced six different winners. Fans in Southern Illinois and Northern Kentucky are looking forward to the Friday, June 26 tour stop at Paducah International Raceway.

Last year’s event at Paducah was canceled due to rain. With the tight schedule, it was not made up during the course of the Summer National season, though a big Late Model race was rescheduled for later in the year. Billy Moyer was the most recent tour winner at Paducah, claiming the top prize back in 2013. Looking at other winners the last few years at Paducah, Brian Birkhofer(2012), Ray Cook(2011), Billy Moyer(2010), and Billy Moyer(2009) have claimed victories.

This year’s tour has recently been marred by rain, with three events canceled. In the six events that have been completed, six different winners have found victory lane. Dennis Erb, Jr., Frank Heckenast, Jr., Jimmy Mars, Jason Feger, Bobby Pierce, and Billy Moyer, Jr. have savored the taste of victory so far. 85 different drivers have been on track during the early start to this year’s chase for the championship. Pierce currently leads the standings over Moyer, Jr., Feger, Ryan Unzicker, and Shannon Babb.

The Friday, June 26 event at Paducah will pay $10,000 to win, while the series champion will receive $25,000. The race is named after Chris Smith, who was a local car owner and racing supporter for many years. Among others, he was car owner for the famed PIR racer, Gary Keeling and a sponsor for Freddy Smith. Chris passed away in 2009 after a battle with Leukemia.

In addition to the Super Late Models, the night’s action will also be highlighted by a Summit Racing Equipment Modified Nationals race, paying $1,000 to the winner.

For more information on upcoming events at PIR, visit paducahracing.com or visit them on FaceBook at facebook.com/paducahracing. For upcoming special events promoted by Track Enterprises, visit trackenterprises.com.

Permanent link to this article: http://paducahracing.com/2015/06/the-4th-annual-chris-smith-memorial-to-pay-10000-to-win/