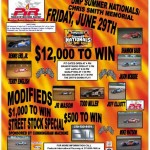 The UMP Summer National Tour kicked off at Brownstown Speedway in Brownstown, Indiana on Wednesday, June 13th and concludes at Oakshade Raceway in Wauseon, Ohio on Saturday, July 14th, making stops in Illinois, Wisconsin, Michigan, Tennessee, Kentucky, and Missouri along the way. “The Hell Tour” received its nickname because of the grueling schedule it presents to even the most seasoned veterans.

Permanent link to this article: http://paducahracing.com/2012/06/ump-summer-nationals-make-annual-stop-at-paducah-international-raceway/